The eye rolled close to the edge of the stage. The sex had been so wild and rough that Kate's eye was now lost. Kate Monster was eyeless in St Ives. Kate's puppeteer, Tayla Caddy, was struggling not to dissolve in mirth on stage. Princeton - the puppet responsible for this collateral damage in the act of  dramatic stage bonking - reached out, as a gentleman puppet would, and slipped the missing eye into the pocket of TJ Richards, his puppeteer. TJ was also doing his best not to corpse on stage. As for  the audience - we were convulsed. The posters had warned us before the show about puppets having sex on stage but eye gouging ...!

The Kidz are back in town. To be precise, KRU2 - the over-18s group within Kidz R Us - were performing 'Avenue Q' for their last night in this spring's run. They return in the summer, thank goodness, and Louise and I will be back for more show-stopping musical and dramatic delight. This blog is a celebration of one of the jewels in the crown of St Ives. Our Cornish town features as one of

the best places to live in the country. It has one of the most scenic harbours in the land. There is a Tate gallery. There is Barbara Hepworth's garden with its wonderful sculptures. Much else too. But never forget Kidz R Us, the youth theatre of St Ives.

Kidz R Us turned 22 in 2016. Back in 1993, Phil Barnett and Margaret Banfield staged a one-off concert to raise funds for Save the Children. The performers were a small, gifted group of local children. A few months later, the first Kidz R Us show was being staged - Joseph and the Amazing Technicolor Dreamcoat. A theatre company that runs just on the hard work and love of volunteers, performers and parents had been created. Today, Kidz R Us perform in their own 320-seat theatre (a converted Wesleyan chapel close to the heart of the town). They guest at the Minack Theatre near Land's End and have performed at the London Palladium, the Criterion and the Royal Albert Hall. I remember seeing them perform for the first time, in 2013. I went expecting a good-quality performance, above-average school production standard. Instead, I was blown away. These were youngsters performing and sounding as if they were on the West End stage. In two decades, Phil had made the connections and brought in the talent and the techniques that make this youth theatre company one of the best in the country.

One of our neighbours was there from the beginning, as a choreographer. She is part of the remarkable crew of volunteers who have kept this dream alive and flourishing in St Ives for two decades. And now her daughter, Melissa Smallwood, is one of the current crop of Kidz R Us stars, performing as Yellow Bear in Avenue Q and ready to take on the challenge of Mary Magdalene in this summer's production of Jesus Christ Superstar. Louise and I find it so wonderful to be this close to something so communal, so inspiring, so much about the young and their nurture and their talent.

This blog is here to celebrate the young and their amazing success story in St Ives. But I can't do so without lamenting the fact that politicians of my generation and younger have ruthlessly sold our society's youngsters down the river. Ripped them off.  Flung them into debt. Alienated them from politics. Removed their hopes of their own home except through inheritance, if they are lucky ...

Back to the joys of 'Avenue Q'. Phil brought in Ian Good as guest director, a professional with three decades of theatrical experience as both an actor and director. Ian's words resonate: "The energy, talent and commitment both on and off stage is equal to any professional company I have ever worked with". 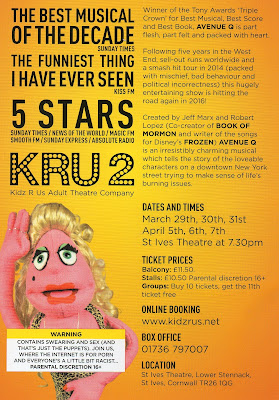 And let's not forget Phil's own remarkable year in 2015. He became a national treasure and star on 'Strictly Come Dancing', one of six remarkable people chosen to appear in a special edition of the programme because of their love of dance and also their amazing personal stories overcoming the odds to succeed. Phil damaged his knee in the first rehearsal, underwent emergency surgery - and still came back in time to pick up maximum points in the Final. You couldn't make it up!

I was so inspired in 2013 on first arriving in St Ives by Kidz R U that I ran my second-ever marathon, Edinburgh 2014 (see my website), to raise money for the youth theatre. A number of you who follow this blog will have helped me raise sponsorships that brought around £1,250 into the funds of Kidz R Us. They needed £100,000 as a deposit to expand into the building next door and ended up around £10,000 short and lost the opportunity. But nothing daunted new plans are being devised. This is a company that will never settle for less than the best. Now, Louise is working on her next piece of textile art, a quilt that is called 'Any Dream' and was inspired by last year's production of 'Joseph'. Five hundred hours of work, a £5,000 quilt. To be exhibited at the NEC, Birmingham, this summer and then used to raise funds for Kidz R Us. See Louise's website for further details.

Phil spoke on stage last Thursday and said how good it was to see so many people in the audience - it was almost a full house - but he acknowledged that the audience figures for the earlier shows had been disappointing. He appealed to us to spread the word to ensure that the summer season run was packed. How could it not be, I thought. Well, good theatre is sometimes about taking risks. Puppet sex is not to everyone's taste. I've heard tales of the disapproval in some parts of the town.   But read the national reviews of 'Avenue Q'.  Read our local review by John Hancock in the St Ives Times & Echo. And celebrate, in a post-Freudian kind of way, this delicious and optimistic comedy and its wonderful band of performers. Come and see it in the summer, if you get a chance. Full details on the Kidz R Us website.