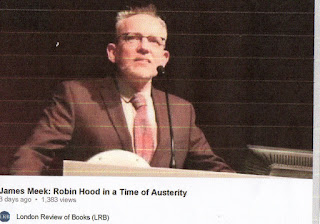 My fellow Catz undergraduate historian, David Revolta, gifted me my discovery of the joys of the London Review of Books in 2009. It has been an indispensable part of my intellectual and political life ever since. My political fantasy 'The Road To Corbyn - A modern-day Pilgrim's Progress' (due to be published by Matador in the summer of this year) follows the precedent of John Bunyan's 'The Pilgrim's Progress' in having authoritative referencing for its truth claims. It is no surprise that London Review of Books features prominently in the References section of my work. And the chapter in which the Interpreter provides a historical analysis of the contemporary housing crisis is indebted to James Meek's article Where will we live? in London Review of Books 9 January 2014.

So when I saw that James Meek had contributed an article on austerity in the U.K. in the LRB this month (18 February 2016) I looked forward to reading his piece. I was not disappointed.

I find it really exciting when you read or hear ideas that are fresh and original. They are portals into seeing the world differently. They help make better sense of the world we are trying to grasp. They are gifts that develop our understanding. That is what James Meek has succeeded in doing in his article Robin Hood in a Time of Austerity - he has gifted us a deeper understanding.

What then is this gift? What is he saying?

First, he spells out the Robin Hood myth with which we are all familiar. When folk are exploited by a ruthless, unaccountable figure of wealth and power (the Sheriff of Nottingham), taking from the rich to give to the poor becomes a morally acceptable, even desirable, course of action. Robin Hood is the agent of justifiable redistribution, returning the taxes that should never have been taken from folks in the first place. In the words of James Meek, 'Robin Hood is a programme of the Left. Robin Hood is Jeremy Corbyn. He's Russell Brand. He's Hugo Chavez'.

So far, so good. Now comes the gift of fresh understanding, the flash of originality. James Meek goes on to claim that the wealthiest and most powerful in Europe, Australasia and North America have turned the myth to their own ends and to their own advantage. Astonishingly, shamelessly, in their new version of the Robin Hood myth the traditional poor - the unemployed, the disabled, refugees - have been identified as the villains. They have been put into the conceptual box where the nasty, wealthy Sheriff used to be.

In this new version of the myth, Robin Hood in Meek's words has become 'a tax-cutter and a hand-out denouncer. He's Jeremy Clarkson. He's Nigel Farage. He's Margaret Thatcher and Ronald Reagan. ... He's in the pages of the Daily Mail, fingering a workshy good-for-nothing with 11 children, living in a luxury house on the public purse. Robin Hood has become transformed into the protector of the rights of all "hard-working people". That's everyone who is employed and who has property, be they 'a struggling small-time café owner with a bank loan or the richest beneficiary of inherited wealth'. Robin Hood is now on the side of all of us who are in this together, the British people, the hard-working people, who must take sides against those who want to take us for a ride, who want to bilk us, to exploit us.

How far from reality is this new myth! James Meek goes on to sketch the real world we live in.

* Where the real poor are taxed more heavily than the rich. In 1977, the least well-off fifth of households (20%) paid 37 per cent of their gross income in direct taxes (such as income tax) and indirect taxes (such as VAT), against 38% for the richest fifth. In 2014, the tax taken from the poorest group had gone up to 37.8%, while the taxes paid by the richest had gone down to less than 35%.

* Where the poorest bear the brunt of the costs of the privatised electricity and water supply services that have increased faster than inflation and take little account of people's ability to pay.

He reminds us that the real force of the Robin Hood myth lies in that Sherwood Forest moment when the people realise that the Sheriff's 'strong-box of silver coins wasn't just money stolen from them individually, but power robbed from them collectively, and that they needed to wield that power collectively as much as they needed their money back.'

James Meek is right. We need to get back in touch with that sense of collective power that brought about Clement Attlee's Labour victory in the General Election of 1945 and the creation of a welfare state for the benefit of all, rich and poor. My blogging platform is there to help me as an author generate interest in what I have written. But it is also there as part of my personal endeavour to ensure that the Conservative misgovernment of this country ends in 2020 after a Jeremy Corbyn-led Labour Party, riding on the back of collective power, secures a decisive win in the General Election of that year.