For my Redwing Residency, I arranged a programme of eight talks during June and today - Saturday 23 June - marks the seventh in the series. Last Tuesday's talk on 'Drink in Victorian Norwich' I chose not to give because the handful of people who had met with me that morning became involved with me in a discussion about the role of money in a capitalist global economy and how that affects the local area and our lives. It seemed more important to stay with that momentum and indeed some interesting developments may well follow. Expect a blog some time soon.

I will give my talk on 'Drink in Victorian Norwich' this coming Tuesday - 26 June - at Redwing. It will be the last in the series for June but I appear again on Monday evening, 9 July, for another Jago talk focusing on flight in his life as part of the Penzance Literary Festival Fringe.

My first five talks in June have all been followed by a blog-post and if you are not familiar with these do have a look at the links that take you back to these earlier June posts. My talk today was an update on the Jago story, examining the flow of detail about Jago's life that has continued to emerge from cyberspace in the months since completing the biography in early March. There will be additions to the text in the light of this new material.

Back in May, I had posted a blog with the title: 'Jago Stone - The American Connection - Part 7 - that included both detail and images that had come my way across the Pond since March this year. Here is a link to take you to that blog.
https://robdonovan.blogspot.com/2018/05/jago-stone-american-connection-part.html.

Since then, there has been more. If you opened the link, you will have read that Jenny Janzen and her husband have sixteen Jago paintings in their American home. Earlier this month, Jenny sent me

images of three of these paintings. Here they are - at intervals in this post:

Those of you familiar with this Jago story will know about the American art collectors, Keith and Joan Goodenough, in Virginia. They found by chance a Jago palette-knife dated 1976 at auction in the Fall of last year and bought it, posting the image on Facebook. That story you can find using this link and pressing here. Just over a week ago, Joan sent me this email:

After a long delay I have finally found the titles for the watercolours which were sold in the same sale by the same consignor as my oil painting.

I hope your book is progressing well.

Jago's son, Merlin Porter - the Oxford artist, will love discovering that his dad painted the Examination Schools off the High in Oxford. My question is were these water-colours painted in situ or from photos? I wonder who bought these water-colours in that Virginian auction room - we don't know and haven't been able to find out.

There have been some interesting developments on this side of the Atlantic too. I have already produced a blog-post in early April telling the story of Jago's letter to the Guardian newspaper in 1975. Here is the link to access that remarkable tale - and many thanks again to my best friend, David Siggers, in London for the tip-off.

The Ancestry website through which I have obtained birth, marriage and death certificates for Jago operate a system of follow-up Hints. A month or so ago I got an Ancestry Hint online that there was now a marriage certificate available for Jago's mother. That certificate I now have - the passport to Jago eventually achieving legitimacy aged 11. Until then, he had been - to use the language of the past - officially a bastard. Remember, according to the family story, his grandmother refused to allow her daughter to bring up the love-child, James aka Jago, until she had found a husband so James/Jago was brought up by his aunt until he was aged 5 when his mother married Wilfred Stone. And then it was another six years before Jago's legal status was changed and Wilfred legally became Jago's father.

And in April I got this email from Rod Brown:

'I met Jago Stone back in 1971. I was working in a general store located in Wellingborough, Northamptonshire. My brother Reg and I owned the store. It was around Maytime and I can remember this slim man walks in and said would you be interested in having your shop painting, we said no, and he introduced himself more formally and tells us that he paints in ink and water-colour, and would we consider our property being painted by him - and we said yes. The price was £10.00. The painting did not take him long to do.

Jago told us about his past career and that he is painting full-time and travelling to various areas.

We offered Jago tea, biscuits etc, he being a good old boy!!! so to speak.

Jago was in the area for about three weeks, finding lodgings in the Red Lion pub at Little Harrowden north of Wellingborough and about two miles from our shop. He came in quite regularly, being given tea, cakes and biscuit and at times would be "mother" and getting our teas for us. Despite his past we trusted him. I went for a pint with him at least two times … '

There are other stories and more contacts but I'll save those for another time and another blog. I hope you have found these stories and links interesting.

One more image from the Redwing Gallery on Saturday to close this post: 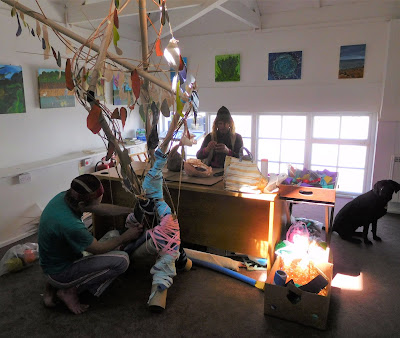