The focus for this talk - given on Tuesday morning, June 12 2018 - had come out of my experience of going to Waterstone's in Oxford and Truro and Felixstowe, on my travels, to see in person my book 'The Road to Corbyn' (TRC) for sale in the bookshop - only to discover that the staff were at first unsure whether I would find it on the fiction or non-fiction shelves. How do you classify such a cross-genre book? I loved the way Blackwell's in Oxford had solved the problem. They have a section of a whole floor devoted to Politics and within that section half a shelf devoted to the subject of 'Corbyn' and labelled as such. There were five titles on that half-shelf and each title was represented by multiple copies. There were three copies of TRC. And yes, I did buy one - as a gift for a friend, aka Alter Ego!


Talking of friends, it was lovely to have a good handful of new friends in the audience for this talk - my 4th in the sequence of 8 during June. Returning for a second time, there was John Pestle who attended my first talk and Su Ormerod who attended my second talk - press here for the link to my blog that tells that story - and Peter Fox who has attended all to date, as has Roselyne Williams. Linda Camidge was also part of the group and you can read about Linda's contribution to the TRC story in my blog to accompany my third talk - just press here.

I began my talk by praising the practice of virtue. The virtue of completing intended aims - our good intentions. Our lives can seem so rushed these days. There is so much to do - and so we find too often


that we never get round to doing what we always meant to. Specifically I'm talking about books - books that you and I have on our must-read list and never quite get round to taking down from the shelf.

Moving to Cornwall in January 2013 enabled me to turn my mind to how I would write up my thoughts and feelings about Austerity and Misgovernment. It also liberated me into picking up and reading a book I had for two decades meant to and never had. In late March, early April, I was savoring the experience of my journey through John Bunyan's 'The Pilgrim's Progress' (TPP), its first part written in 1678 when Bunyan was aged 50; its second part in 1684. By the time Bunyan died in 1688, a decade later, the book had become a best-seller with 12 editions and translations in Dutch, French and Welsh. 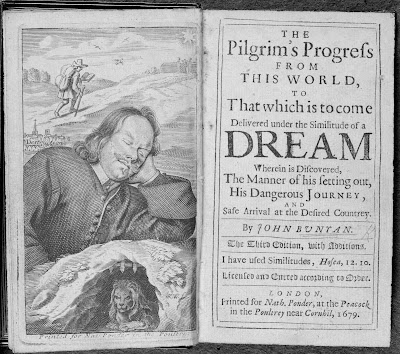 How would I classify Bunyan's classic? Fact or fiction? It is, I suggest, a work in which Fiction serves Fact. For Bunyan, the truth of Christian revelation was an indisputable fact. The Christian Bible was the repository of that truth. And so every time Bunyan's Pilgrim encounters that Christian truth on his journey, the author provides the Biblical justification in his extraordinary set of marginal References. TPP is a work of Christian scholarship.

How would I classify TRC? Much the same way - a work in which Fiction serves Fact.

Roger Pooley, the Keele editor of the Penguin Classics edition of TPP, writes in his Introduction about the role of Allegory, Romance and Fiction in Bunyan's work. Pooley notes that TPP presents itself as a dream narrative, and like many such from medieval and early modern times, it is allegorical. By the time Bunyan has reached his conclusion, he is confident enough to claim that his allegory about a pilgrimage will make its readers into pilgrims.

So, if allegory is particularly suited to religious writing, is it suited to political writing? My instinct in early April 2013 cried out Yes! It only took a micro-second of creative inspiration for me to realize I could follow in Bunyan's wake and devise an allegory in which a 21st century secular pilgrim journeys to find truth.

Bunyan's religious pilgrim set out on his journey to find out why there was suffering and how to bring that suffering to an end. He discovered the answer lay in evangelical Christianity and the redemptive power of faith in Christ the saviour. My secular pilgrim also sets out to find why there is so much suffering in the world and how to change things for the better. He discovers the power of socialist explanation and hope as he grapples with the allegorical forces of Mammon. Members of the UK government (2010-2015) are personified in such characters as No Benefit, Head Boy, Pocket Money and Alf Price. Socialist understanding is provided by the words of the Interpreter.

Bunyan's truth - Bunyan's fact claim - is that with his 17th century version of evangelical Christianity we have the way to our redemption as a species.

My truth - my fact claim - is that a programme for 21st century socialism such as Jeremy Corbyn's provides the most virtuous and desirable and effective model for living together that we have in our world. Genuinely controlled capitalism in the interest of the people - a kind of Chinese management with human rights protected. People before Profit. A Managed Economy for All.

We at least share lofty aims, Mr Bunyan and I.

And on a related lofty aim - the increase in the circulation of my book - here's a link to use to buy a copy for your self or as a gift to the young and the young at heart. Press here and thank you!