Even as I was completing my biography of Jago Stone, a new American connection was being made in February this year. Jenny Janzen, from Virginia in the USA, emailed me with the story of her connection with Jago through the 16 paintings of his that she and her husband have in their home. As the months have passed, we've kept in contact and in fact Jenny was in the UK in April, visiting London and cousins in the Cotswolds. Unfortunately, technical problems have prevented me from seeing any images of the art but Jenny has provided me with a list of the 16 paintings that I've scanned for you to see later in this blog. Jago's painting subjects are wider than I realised. Did he work from a photo when he produced his painting of Elm Hill in Norwich?

Jenny explained that she had been a long-term resident in England and first became aware of the name 'Jago Stone' possibly in 1988 when he died and she heard something about it on the BBC. Twenty-two years later, she went to her High School Reunion and met her widower high school/college former boyfriend, Bob. 'It was like picking up on an unfinished conversation'. Their romance led to marriage in December 2011 and afterwards when she came to her husband's house in Virginia to live she became acquainted with the Janzen collection of Jago's art. Bob, like John 'Adam' Adamski, had been a senior member of the USAF command - in Bob's case, at the Croughton base next to Upper Heyford, for three years in the mid-70s. He and his wife, Norma, had collected the Jago paintings and then taken them back across the Pond when their tour was over. How many other Jago collections are there in the States awaiting discovery?

Then at the beginning of this month of May, Dee Allen emailed me from Texas in the United States. She began by saying 'We always enjoyed Jago's visit" and continued by relating the story he had told of his hiding in the church under the altar to steal the communion ware; his being caught and sent to jail; and his learning the art of water-colours whilst inside. Dee continued: 'I don't think he had been out of prison very long when we first met him'. Soon, Dee and her husband, Gene, began to acquire works of art by Jago. 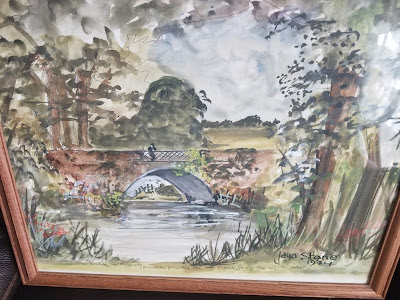 Here, above, is an image of a Jago Stone painting of 'The Bridge at Edgcote' - a subject I had not seen depicted by Jago before - that is in her collection.

colours that her son has.

She apologised for the reflections from the glass and promised that she would try to get sharper images if needed.

I think these are good enough for present purposes and thank Dee and her son warmly for them and her permission to use them.

Another six paintings - actually seven, as you will read - to add to the catalogue of Jago's recorded work in the States, along with the sixteen in the Janzen collection - twenty-two or twenty-three in total.


I wrote back to Dee with more questions and she replied: 'Our tour in England was 1971-1974. Jago must have started visiting us in early '74, as our pictures are all dated 74 and we left in that year. We lived in Wardington which isn't far from Edgcote. There was an American family living at Edgcote who introduced us to Jago. My husband was stationed at RAF Croughton. We have one more picture which another son has and will send to you as soon as he can get a copy to me. I think it is of the Cropredy Pub ...'.


'I have read some of the info on your website - very interesting.'


Thank you, Dee, for expressing your interest. May I use this as an opportunity to appeal to all readers who haven't yet signed up for the Mailchimp Newsletter to do so. By doing so, you are showing your interest in this writing and research and helping me gather statistical support for my bid to get the biography published. If I can point to the fact that more than 100 people have said they are interested in the subject and in buying the book, that's firm evidence that the foundations for a market are out there, on both sides of the Atlantic. Here's the link to press:
http://www.robdonovan-author.co.uk/JagoStone-Biography.html

And here is the catalogue of fifteen paintings in the Janzen collection I referred to in the first section of this post: 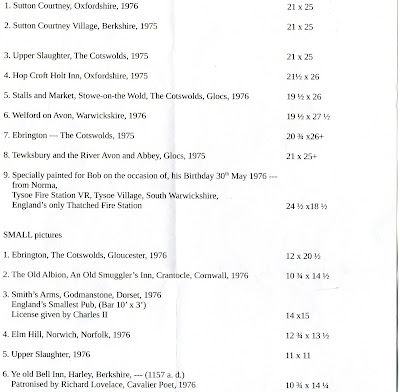 And here's the link to press for the latest Mailchimp Newsletter:
https://us12.admin.mailchimp.com/campaigns/show?id=1300861

I hope these further two American connections have made interesting stories. Do get in touch with your comments or maybe your own Jago tales.