This is a Jago Story hot off the press. It was Sunday 29th March - gosh, less than a week ago! - when I received this notification from Malcolm Stirling on my Facebook 'Jago Stone - A Biography' page:

Jago Stone was travelling door-to-door offering to provide a painting of your house. He had fairly recently finished his stay at Her Majesty’s Pleasure and was looking for work. My mother was charmed by his openness and candour and agreed to pay, as I recall, £10 for him to paint our house. My sister now has the picture in her home.

And Malcolm added an image of the painting: 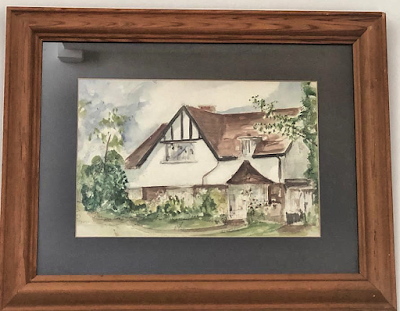 I replied as soon as I could:

Thank you so much for gifting this image of your sister's painting. My email is robdonovan@waitrose.com if you or your sister would care to add any details to this story. I would love to know the date of the painting - and the location. As you can
read in the biography that was published earlier this month ('The Remarkable Life of Jago Stone')', my wife's parents commissioned Jago to paint their house in Camp Road, Gerrard's Cross in 1969. Jago emerged from HMP Blundeston in the summer of 1967. This is an exciting find!

Within days Malcom had responded by email:

The painting is of Westley, Bois Avenue, Amersham.

It was a July morning in, we believe, 1968 that Jago arrived on our doorstep and offered to do a painting of our house. He told my mum that he was recently out of prison and had served his time for burglary. He said he had developed his painting skills 'inside' and was now trying to earn a living as an artist.

My mother accepted his offer and he set up a stool in the garden and was painting for most of the morning.

When the family congregated that evening Mother showed us the picture and told us the story. There were comments such as "you let a self confessed burglar into the house and garden? What better ploy to case the joint!" But we consoled ourselves with the view that, having seen inside the house, he could see we had nothing worth stealing.

I recall Jago in loose fitting pale trousers and a sun hat sitting on the small stool he carried with him.

I replied, asking more questions, and by the afternoon Malcom had sent this:

Yes, feel free to publish the story in your blog.

Attached are some photos of the painting and a quick sketch from my memory of seeing Jago in the garden painting on that July morning:

Malcolm's 'quick sketch' is splendid. I exclaimed with delight when I saw his drawing - Jago lives! I am sure Merlin Porter, Jago's son who is an Oxford artist, will be particularly thrilled to see his dad imagined in this way by a fellow artist. Thank you indeed, Malcolm!

I hope you have enjoyed this blogpost - another tale from the cyberspace detective agency.

To finish with, an image and a tale that features in my biography of Jago. The connection lies in the child's enchantment with the skills of Jago the artist.  The extract below is taken from pp.143, 146 of 'The Remarkable Life of Jago Stone' by Rob Donovan (2020) - press this link for more information:

'In May 2017, I had this email [from David Hunt], with an attachment of three images of one house, from another of Jago's 'children'; the offspring spellbound by the artist who had settled at an easel to paint their parent's houses:

After recently moving house and hanging paintings I decided to go look up the family Jago Stone; and you appear to be the designated curator. Me and my two siblings are in this painting (see below) … The house is Church Farm House, in Church Road, North Leigh, Oxfordshire, in 1973 … I was 6 (nearly 7) and remember him painting it vividly. I was confused afterwards that we were in it as we hadn't posed there when he painted it. I'd been standing behind him watching him for parts of it and I think even helped dab some of the trees in the top corners when he said I could help. I also remember the ladder wasn't there either, that was something he added, not sure why.'

This is not the only painting of a house by Jago where a ladder appears; 'once a burglar, always an artist' - and ever a man of wit.

My father [John Hunt] was an Oxford Don at Teddy Hall, later inducted into the Royal Society (died 2012).
My mother devoted her life to Genetics research (died 2014) [Ann Hunt, MBE, had studied Chemistry at Cambridge where she met … John Hunt. She co-founded what is now the Tuberous Sclerosis Association in 1977].
David Hunt (me) - 6 years.
Helena Hunt - 4 years.
James Hunt - baby (died of Tuberous Sclerosis aged 13).

Jago Stone, the artist, had clearly become part of the fabric of the Hunt family as had the physical presence of his painting of their Church Farm House with the children of the family conjured in watercolour in the foreground. Jago had left his mark.