had published a letter from Jago Stone who signs himself as 'Artist, author, ex-con.' with the address: The Old Rectory, Banbury, Oxon.

The event that had triggered Jago's letter was a riot in Winchester prison and the letter beside Jago's takes us further into that episode in the history of this stain on our so-called civilised values - life in our prisons. Here it is: 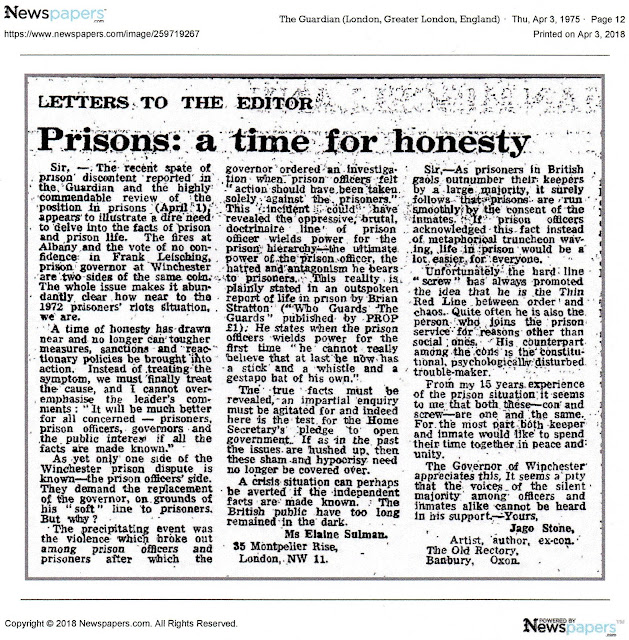 Remember, you are reading about a crisis in our prisons in the mid-70s. The image that opens this blog is of the Strangeways prison riot in 1990. The problems are systemic and endemic. In 2015, the author of the report into the Strangeways riot - Lord Woolf -  was calling for another UK enquiry into the state of our prisons as conditions were as bad as they were in 1990 when the dramatic siege went on for 25 days, two people died, and hundreds were injured.

Jago also makes the startling claim that prisons are run smoothly by the consent of the inmates. The silent majority among officers and inmates alike need to be heard - they after all keep the prison from descending into a state of riot.

I first read this opinion of Jago that prisons depend on their convicts for their smooth-running in his autobiography and the link with the ideas of Baron Giddens is explored in my biography. Here is the relevant extract:

Chapter Five: ‘Doing Time’ (pp.25-30) provides Jago with the opportunity to impart his wisdom on how to cope, indeed how to thrive, behind bars. I remember gasping out loud as I read one sentence. To explain, I need to relate a conversation that I had with my father-in-law, Ronald Watkins, in the early 1990s. Ronald was still working as a consultant in his field and he was talking about his contact with Anthony Giddens, now Baron Giddens, the eminent British sociologist and political thinker who had been employed by Ronald’s company on Ronald’s advice to advise on management structures. I became fascinated with a key idea of Giddens that Ronald explained that evening:
‘Prisons only continue to function because prisoners allow them to’.
What a stimulating way of looking at how an institution such as a prison operates! I remember playing with the idea that schools followed the same pattern? Were the pupils responsible for their own fate? Did schools function because the pupils allowed them to do so? How wonderful it must be for Giddens to have the time and space to come up with such an original speculation. The most creative thought I had had in those days was the one I kept repeating:
‘Teaching atrophies the mind’.

And now back to the passage and sentence that made me gasp out loud. Listen as Jago gives his lesson for the day to Peter [his supposed nephew]:
‘As the weeks go by you will discover that there are defects in the machine. This is because it isn’t really a machine at all. In a prison holding 300 men, there may be 50 prison officers. And only 25 of these are on duty at any given time.
Therefore it follows, I think, that a prison runs smoothly not by the will of the staff but by the consent of the prisoners.’
Bright man, Jago.'

Did Giddens ever read Stone? How do ideas circulate? I doubt if Stone ever read Giddens. But great minds think alike ...  At least my interest in Jago Stone allows a little posthumous airing of a vital and original observation.

And an opportunity to air the state of our prisons yet again ...