UNDER THE SURFACE OF ST IVES IN CORNWALL - PART ONE

The editor of the St Ives Times and Echo, Toni Carver, has been looking for an opportunity to publish a piece I wrote called 'Under the Surface of St Ives'. This he was able to do, in two parts, in the editions for Friday, January 19th, 2018 and Friday, January 26th, 1918. These articles stand as a tribute to the late Jim Hodge who passed away on 23 November 2016.

Here is the first part of my original text:

We moved to our terraced house, situated off the Stennack, coming out of St Ives, uphill, heading S.W., in January 2013. By the summer of that year, I had written the piece that appears this week for the first time on my website - press here. It is called 'Under the Surface of St Ives.' Do read it in its entirety if you can - it provides a remarkable insight into St Ives in the past thanks to the stories of my two sources, John Toman and Jim Hodge. The picture below shows the old Stennack school, the Board School, built in 1880 on the outer margin of St Ives. The river and road are on the other side of the school, unseen in the photograph. The houses you see now do not exist. Instead the landscape is dominated by the spoil heaps of the Trenwith mine. This is an industrial landscape. Men were mining under the surface as the shutter opened on the camera to take this shot. Men were making their living. Men who were to die before their time, some in accidents, some through the substances they inhaled.

Jim Hodge is 79, still a man broad of shoulder. It comes as no surprise when he talks of playing rugby with the men, the miners and other underground workers, who feature in his remarkable story. John Toman is in his mid-seventies. Jim and John share a mutual respect. John, after all, served for a time as a stand-in mine captain during his life in mining as a surveyor. Both are men who have achieved success in their professions. Jim grew up with the pull of the sea; fishing would have been his first choice but his father wanted him to learn a trade and plumbing won the day. Fish might have


been plentiful in the quota-free 1920s but the price was low and livings hard-won. When Jim retired, he did so as the Area Manager for South West Water in south Cornwall, responsible for water supply from Portreath to Redruth across to Falmouth and all places south-west, including St Ives. His father might have had a point. 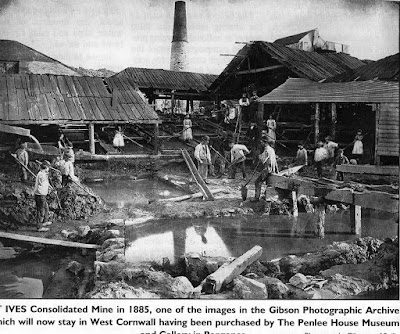 I was first introduced to John by his son-in-law, Mark, a St Ives policeman, who is married to Belinda, one of John’s daughters. Mark and Belinda live across the road from us in a 1960s housing development up the Stennack. And here with this name we reach the heart of the matter. The steep incline – the Stennack - that runs from south-west/ north-east down into St Ives is the name of a road that takes its name from the river Stennack that flowed down this course, sometimes in full flood torrents, and which now the attentive pedestrian can hear under their feet or glimpse as a channelled stream by the roadside to the east. The Stennack has been tamed for now but the name remains as a passport into one of the three livings for St Ives folk in the past: fishing, farming – and our focus, mining. All this before the burgeoning of the tourism industry of today and the arrival of the ‘emmets’ which, in Cornish dialect, is a term for the sun-burnt tourists who mill around like ants in the summer season. When the Romans came, not to holiday, but to stay in 43 A.D., they brought their language of Latin. The Latin name for tin is stennum from which comes the chemical symbol for tin: Sn. Stennack means tinny. The river Stennack follows the line of one of the lodes of tin-bearing ore, cassiterite, that were formed around and within the granite masses some twenty million years after their initial raising.

Tin was first found on the surface in the river gravels, as it is now in Asia. When that has been exploited, you have to go underground and mine for it, often – but not always - under the copper-bearing lodes that penetrated the granite in these geological upheavals. We inhabit a landscape that still echoes to the sound of the thud of miners’ boots if you have the ears to hear.    Control of the international tin trade was very likely part of the Roman agenda. Those parts of Cornwall that were domed by granite had gravel-deposits of tin ore that had already been discovered by Phoenician traders. No mining was needed then, unlike the practice in the last three centuries in Cornwall. Today the price of tin may be rising but 80% of the world’s supply comes from low-grade gravel deposits in Malaya, India and Thailand and the exploitation of these reduced the price of mined Cornish tin in the 1980s and 1990s below the point of profitability. Cornish mining ended then, other than as a tourist exhibit. But in and through the tales of men such as Jim and John the soul of Cornish tin mining is glimpsed.

This is my account of their tales when they came together in our living room to talk about the mines under the Stennack on Monday morning, September 30th 2013.  The prize exhibit of the morning lay on our table. It was a survey plan of the lode that runs underground the length of the Stennack showing where the main shafts are located that served the two main mines that worked this lode: St Ives Consolidated (known as Consols) towards the top of the incline and Trenwith lower down. Our house rests between the western edge of the Trenwith mining area and the eastern edge of St Ives Consols We bought it less than a year ago and as happens these days we had a Mining Search carried out. We had learnt from this that the available abandoned mine plans of St Ives Consols are poor and do not show the full extent of the underground workings. Not until 1872 did it become a legal requirement for metal mines to keep accurate survey plans of workings and lodge these the Mining Record Office upon abandonment. However, this legislation did not require mines to survey any older workings that were inaccessible or unused after 1872. Nor did it apply to mines employing less than 12 people working underground. As a result, most of the older workings and smaller mines are poorly recorded.

What became ever clearer listening to Jim and John was the sheer magnitude of the mining enterprise that had been a way of life for the best part of four generations of St Ives families on and under the ground covered by the Stennack and its valley flood-plain from the early nineteenth century before the final closure of St Ives Consols in 1915. John, the professional surveyor, is still astounded at the geological rarity of the Great Carbona shown on the survey plan resting on our table. “Look! Can you see, running at right-angles to the direction of the lode … It extends for 900 feet and is 600 feet in depth - and between 50 and 70 feet wide! It’s unlike anything else I’ve seen elsewhere – and there are smaller carbonas marked too!”

Carbonas are large and unusual ore formations, in this case of cassiterite, the tinbearing ore, which when excavated, produced large caverns whose roofs had to be supported by massive timbers. Cyril Noall, the St Ives historian of the last century, explained what happened: ‘In April 1843 a workman’s lighted candle stuck against a beam in the fabulously rich ‘Great Carbona’ caused a disastrous fire which burned for six weeks and led  to the destruction of that section of the mine.’ Today, nothing of the Consols mine remains above ground; the St Ives fire station off the Stennack road is one landmark building that indicates where the old site used to be.  John Halse had developed St Ives Consols from the 1820s and 1830s and the total recorded returns down to 1892 were valued at £1,024,467 with tin production (1827-92) amounting to 16,400 tons. These figures indicate astounding profits from underground ore. By comparison, the Gwennap area of copper mining on the edge of Redruth, twenty miles away, was said to be the richest square mile in the world in the 1820s and 1830s. The Consolidated Mines in Gwennap, owned by John Taylor, with its 19 engine houses for pumping, winding and crushing alone yielded over 300,000 tons of copper ore in 1819-40 which sold for over two million pounds. 2 John Halse’s fortune may not have been quite on a par with John Taylor’s but it was still enormous and the Great Carbona must have been the foundation for it. Around 1830 James Halse laid out the mining village of Halsetown on the eastern edge of his mine to house his miners and their families.

The Stennack industrial landscape above ground can be viewed in a few old photographs dating back to the late Victorian period but the real feel of early nineteenth century Cornish mining life is best conveyed by this report of a visitor in the 1790s to what became John Taylor’s mine in Gwennap: ‘The dismal scenes of whims [winding engines – steam engines used for haulage], suffering mules, and hillocks of cinders, extends for miles. Huge iron engines, creaking and groaning, invented by Watt, and tall chimneys, smoking and fuming, that seemed to belong to ‘Old Nicholas’s’ abode, diversify the prospect’.

I will publish Part Two of this exploration of St Ives Under the Surface tomorrow, Sunday 4 February, 2018.