Just over a week ago, I posted the first part of the story of Jago's American Connection and I introduced Becky Bender from South Dakota and John Michael Adamski from Washington State as my new primary sources in my cyberspace research into the life and works of Jago Stone. Yesterday evening, a third primary source introduced herself by email from across the Atlantic - but more of that in Part 3. It can be very exciting, can't it, this shrinking of boundaries and experience of the world as a global village.

In this blog, as promised in Part 1, I will share more news about Jago and his paintings that I have learned from messaging John Michael on Facebook. In Part 1, I explained that John Michael had shared with me seventeen pictures of paintings that Jago had painted and were now part of  his  father's art collection. Pictures of the painting of George Washington's ancestral home - Sulgrave Manor - featured in that blog.

Here in Part 2, are pictures of five other paintings that comprise the artwork revealed in these seventeen pictures. First, Jago's depiction of a view that has caught the imagination of so many tourists - the Cotswold village of Lower Slaughter.


And now another popular view, this time looking towards the bridge at Henley-on-Thames. John Michael explained that Jago painted one of these paintings when he was sharing a coach trip with


American ladies from the airbase taking a scenic route through the neighbouring countryside. Was this the painting that came out of that journey? Or was it one of the other four?


John Michael  also related another story from the family archive of Jago memories. It was the day that the family were leaving their family rented home on the USAF airbase at Upper Heyford. John Michael's father, John "Adam" Adamski who was then a serving Lieutenant-Colonel in the USAF, had commissioned Jago to paint the view from (or of?) this rented home as a keep-sake memory that John "Adam" could take back  across the Pond to his American home in Philadelphia. Jago worked for several hours to produce the work, refreshing himself from time to time with sips from the bottle of whisky that had come as part-payment for his work, along with a fiver. Everyone was very content with the deal and the outcome. I don't yet know which of the paintings is that actual work - but they are all worthwhile  and interesting examples of Jago's talent. The first depicted below is of an idyllic scene - on a 'High Summer' day  - and evidently close to Worcester on the edge of the Cotswolds.


The second picture's location is as yet unclear to me: 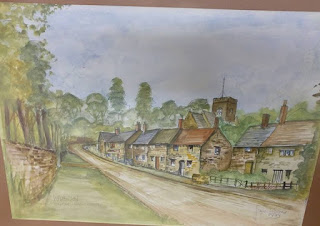 The third picture has a title and inscription that I haven't yet been able to fully transcribe but what is clear is  that it was painted 'for Elkie & Adam' in 1976. 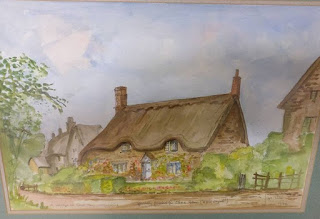 I hope you have enjoyed this excursion through the American side of the Jago art world. More will follow! (I've since revised this post to portray the last two pictures more successfully - and John Michael has been in touch to say that his father will be explaining more about the collection.)