They really want to see the back of him, don't they?

The majority of  the Parliamentary Labour Party allowed themselves to be manipulated into supporting a carefully planned coup against Jeremy, their democratically elected leader, in the aftermath of the Brexit vote. The revolt was designed to satisfy the political ambitions of a few and restore the tried and failed recipes for political purpose and action that have been the undoing of the Labour movement for the best part of a decade.

But how dumb can you be? Jeremy was never going to be bullied or coerced into resignation. He would never abandon his own principles that have seen him through decades of opposition to mainstream Labour politics and now form the backbone of the real Labour movement and Party that has taken shape outside parliament. I am talking of the real Labour movement that was responsible for his landslide election victory as the national leader of the Party.

So much for the Labour political elite - but what of the media elite? Even my beloved Channel 4 News was guilty tonight of systemic and systematic rubbishing of the elected leader of Labour. Unchallenged assertions that at nearly 70 the strain was getting to him and his family and he was no longer willing to continue. Behind closed doors, he was considering his position. The Labour Party was unelectable with him at the helm; that was the message from the doorsteps of the country. Corbyn's lacklustre performance was the reason for the Brexit vote. The BBC is of course much worse.

Yesterday, there were rallies in support of Jeremy in towns and cities across the country. There was a fleeting reference to the rally in Liverpool on Channel 4 News and that was it. Precious little in the newspapers today about these events either. I was at the one in Penzance that attracted 150 people at less than forty-eight hours notice. There is scant attention to the report that 40,000 new members have joined Labour in the last week - the Corbynistas are on the move and there is  a new politics taking shape. This is not about one man. It is about a new boldness, a determination to have a better kind of politics and a more just and fairer society. The genie is out of the bottle.

My book, The Road to Corbyn, now has a publication date of 28 July 2016. I hope so much that it can play an educational and stimulating role in the months to come. Remember, the original title was Deception and I think you will find it makes a convincing case for Tory deception (and media collusion) - along with self-deception - since 2010 (and before). I sent Jeremy a copy of the completed manuscript some months ago - the work has become more polished still - and he, being the decent and kind man he is, wrote back and thanked me. "It's a kind and thoughtful gesture and I am moved by it." Jeremy, I and so many others, are moved by your courage, your resolution, and your principles. Thank you. 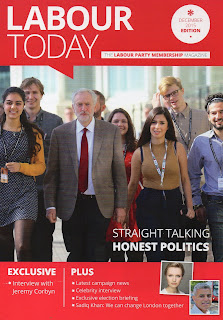